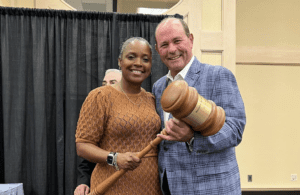 Broadview Mayor Katrina Thompson was selected on Sept. 23 to become the president of the West Central Municipal Conference (WCMC). The announcement was during the organization’s annual dinner at the Stephen Convention Center in Rosemont.

Thompson is the first Black person to serve as president of the 40-year-old organization, which has 51 members — including 40 municipalities, according to its website.

Bellwood Mayor Andre Harvey is a director on the WCMC’s executive committee.

In a Facebook post, Thompson said that she hopes her ascension to the WCMC presidency can be a lesson to young, upcoming leaders.

“This is not a post to brag or [boast], but a post to let all young scholars know that possibilities are available to you and representation matters,” she said.

Thompson was elected in 2017 as the village’s first female Black mayor. She became a member of WCMC’s board of directors in 2021.

The WCMC was founded in 1980 as a regional council of governments for west suburban Cook County. The organization fosters mutual cooperation and communication among its member entities, advocates for issues common to members at the state and federal levels, and offers training and other resources for local government officials, according to its website.

In another professional milestone for a local government official in Proviso Township, Berkeley Village Administrator Rudy Espiritu recently won the prestigious Jack Williams Award for intergovernmental cooperation from the WCMC.

The village of Berkeley and the Berkeley Park District have been hosting ad-hoc meetings for months related to enhancing recreation in the suburb. The next ad-hoc meeting is on Oct. 12, 6:30 p.m., inside of the Bicentennial Room at Berkeley Village Hall, 5819 Electric Ave. in Berkeley.