The redistricting, or “remap,” of state legislative districts that’s mandated by law to occur after the U.S. Census every 10 years is very important. Unfortunately, the process has often been criticized as too political and one where voters are left without a voice.

To address these issues, I’m supporting House Joint Resolution Constitutional Amendment 58 (HJRCA 58), which is a comprehensive, bipartisan measure that will put an independent commission in charge of drawing state legislative district boundaries and protect minority representation.

The commission will be made up of eight members appointed by the Chief Justice of the Illinois Supreme Court and the most senior justice from the opposing political party. Current and recently elected officials are disqualified from serving on the panel, as are lobbyists, business owners who contract with the state and state employees.  This proposal is a win-win for Illinois.

First, this measure will ensure that Illinois meets federal requirements under the Voting Rights Act to protect minority representation. In addition, members of the independent commission will be required to reflect the ethnic, gender, and racial demographics of Illinois. These are important protections that will prevent minority populations from being unfairly lumped into as few legislative districts as possible, as a way to dilute their representation.

In addition, this measure will make the redistricting process more transparent and take the process out of the hands of elected officials, which many of my constituents and residents across Illinois strongly support. The independent commission will be required to hold 15 public hearings throughout Illinois before adopting a plan and must provide the public seven days to review a final plan before it’s adopted.

For these reasons, a wide coalition of groups including the Illinois Campaign for Political Reform, the Illinois Chamber of Commerce, and the Small Business Advocacy Council support this reform. I will continue to fight to get this measure passed and put on the ballot for voters to weigh in on. VFP

Emanuel “Chris” Welch is the state representative from Illinois’s 7th District, which covers Maywood, Bellwood and Broadview, among other western suburbs. 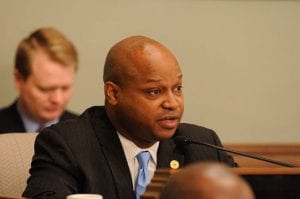