Earlier this year, I spoke with Maywood native and Proviso East grad Kelauni Cook, who last year transformed herself, within a span of a few months, into a leading advocate for diversity in the nation’s tech industry.

Moved by the lack of African Americans and other minorities in the high tech industry, Cook went on to found Black Tech Nation, what she describes as a “social good organization focused on gathering the Nation’s ‘Black Tech Unicorns’ and working alongside various tech companies and local governments to improve the demographics of the tech industry in Pittsburgh and beyond.”

Cook is also the co-creator of Pittsburgh’s first coding boot camp that is specifically for high school minority, female and immigrant students. She’s been featured in the Huffington Post, among other publications you can view if you click here, and has been the only woman of color in attendance Ethereum Hackathon (ethereum is a blockchain decentralized application platform that substantially reduces the risk of fraud), in Waterloo, Canada.

I spoke with Cook about her transition into tech and why so few people of color are in the field.

So how’d you first get into tech?

I got into tech while living in North Dakota with my sister at the time, who was launching another location of her business. I’d went there to live with her to start over. I wanted to study at a sociology and cultural anthropology graduate program at Stanford and was studying for the GRE.

One of my sister’s mentors works for Microsoft. He recommended that I learn coding, instead. When my sister told me this, I thought, ‘That sounds so boring and like something I’d never want to do.’” But my sister said I should give it a try. I had few responsibilities in North Dakota, I had stopped substitute teaching.

So, I Googled some coding boot camp programs and a lot were popping up that cost like $20,000. I wasn’t paying that. So, my sister recommended I Google, ‘free’ coding boot camps. That’s how I found Academy Pittsburgh Coding Boot Camp.

I applied that week, got accepted into the program and moved to Pittsburgh within two weeks. I found some distant cousins nobody in my family knew about and they took me in for the weekend. They picked me up from the train station. The next day, I found an apartment.

There were 17 people in my class, which was the first program’s first cohort. Although it really focused on minorities, the students were mostly white and male. That’s how the tech industry is in general. We did have four black people, seven women and two LGBT individuals. Most of the students were from Pittsburgh.

I was one of the few people in the program with no experience in coding. It was very, very hard. I learned about 15 coding languages and frameoworks, which is barely scratching the surface because there are hundreds that you can do. All of that was in three months. It was very intense. I cried multiple times.

But right after I finished, I had a three-month contract job. After that, the guy who ran the academy wanted me to direct a high school version of the program. When I got into the tech industry in Pittsburgh, I’d go to a lot of events and I didn’t see anyone who looked like me. I’d go to all of these venture capital and startup events — there was never any black women. Even in my boot camp coding class, the only other black girl in my cohort ended up not pursuing tech.

Why are there so few black people, particularly black women in tech?

I think, for one, it’s about exposure. I didn’t know anything about computer science until I got to Howard. In grade school and high school, we didn’t talk about that in our community. It wasn’t cool.

We live in a time, though, when there really aren’t — I don’t want to say excuses, because, systematically, there are reasons why our kids aren’t involved in tech. Particularly for women, because we’re a double minority — we’re both not men and not white. So that’s a factor.

At the same time, however, everything is a Google stroke away. There are so many free programs and opportunities and people to help. There are so many organizations that want to get kids of color into tech. You can literally do a free program and six months later walk into a six-figure job like I did. The thing is how do we get kids to want to do tech?

In Pittsburgh, I do feel like I belong. I’ve been really embraced. Pittsburgh wants to be the Silicon Valley of the Rust Belt so it is very conscious about being inclusive and diverse. I think the mayor is very big on trying to make everyone feel included and since I’m like the only black woman in tech in Pittsburgh, they’ve latched onto me and have made me feel super comfortable.

But that’s not the issue. Pittsburgh still struggles with historical racism. Many communities are super segregated and the standard of living for blacks there is terrible. So it’s not about making one person feel comfortable; it’s about making the whole ecosystem comfortable for everyone. So there’s a way to go. VFP 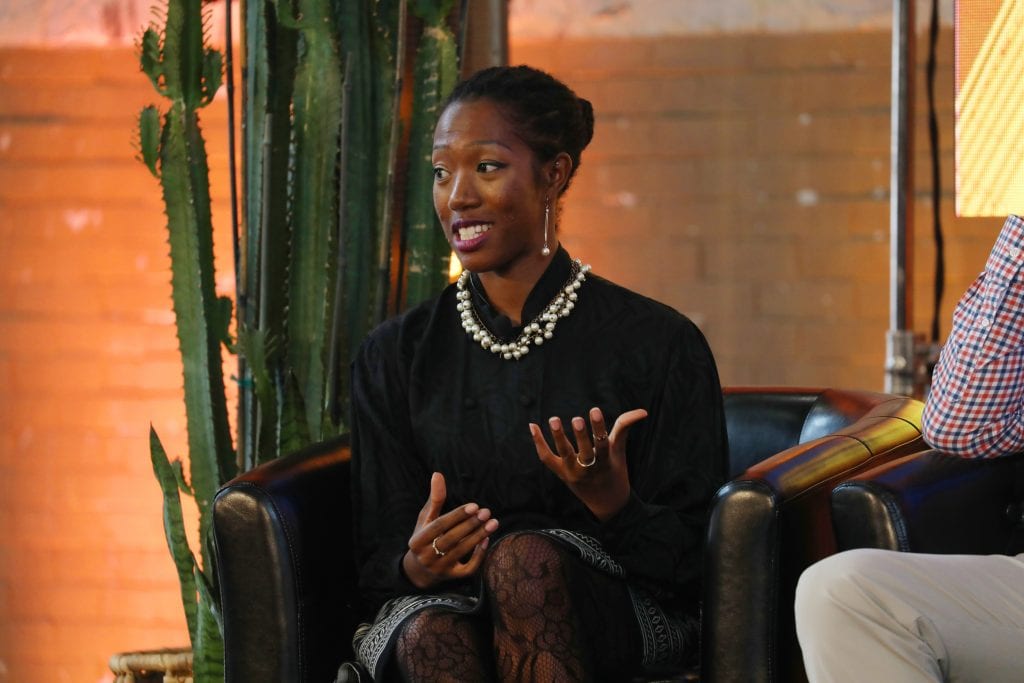 Photos from the Pittsburgh Summit on Tuesday, Nov. 14, 2017, in Pittsburgh. (Andrew Rush/Comcast)