Before observing that a ” black-and-white picture of Doc’s father, Grady, in his Maywood (Ill.) Police uniform sits inches in front of a San Francisco 49er helmet,” Woike writes that Rivers “is ready to draw on his past to help guide his team.”

“In addition to sharing a roof with a police officer, Rivers also got to see the messiness racial injustice can cause as riots ripped through the high school a few blocks away from his home.

“During the 1967-68 school year, Proviso East High School in Maywood, Ill., was a flash point for racial tension, with state troopers and local police being called upon to deal with the violence.” Rivers, who was six at the time, watched that bit of history from his front porch. He saw white and black Proviso East students walking in groups dictated by the color of their skin. Bottles and expletives were hurled across the divide.

“Listen, we need social change. If anyone wants to deny that, they just need to study the history of our country,” Rivers told the Southern California News Group on Sept. 23, adding a point he said he’s mentioned a hundred times. 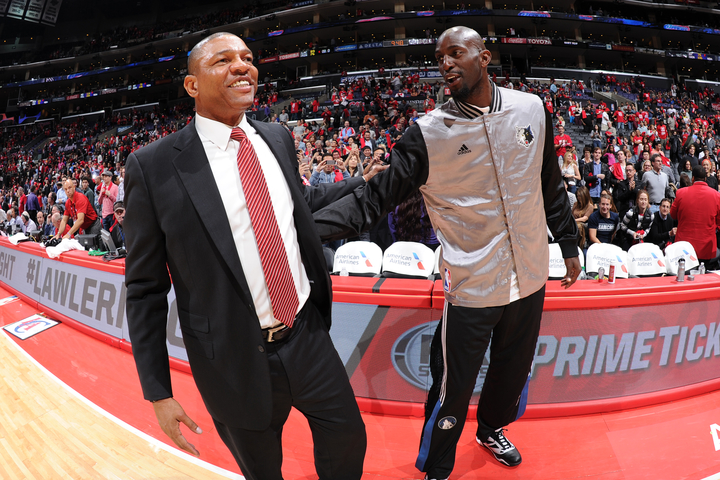 LOS ANGELES, CA – MARCH 09: Doc Rivers of the Los Angeles Clippers and Kevin Garnett #21 of the Minnesota Timberwolves speak before a game at STAPLES Center on March 9, 2015 in Los Angeles, California. NOTE TO USER: User expressly acknowledges and agrees that, by downloading and/or using this Photograph, user is consenting to the terms and conditions of the Getty Images License Agreement. Mandatory Copyright Notice: Copyright 2015 NBAE (Photo by Andrew D. Bernstein/NBAE via Getty Images)