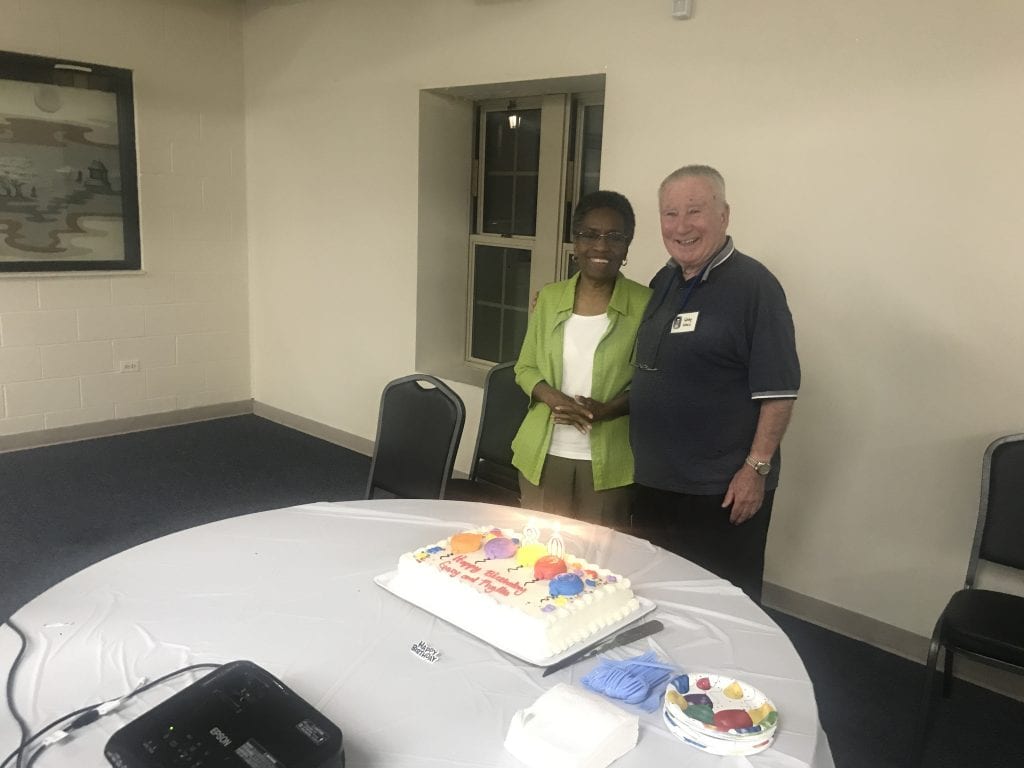 Featured image: Phyllis Clifton and Gary Woll celebrate their 80th birthdays during a gathering on Aug. 27 in Maywood. | Michael Romain

“The president was Franklin Delano Roosevelt and the cost of a house was $3,800,” said Mike Rogers, the president of Neighbors of Maywood Community Organization. “The average price for a new car was $700.”

The date was also significant because longtime NOMCO members Gary Woll and Lucille Clifton were born (Woll on Aug. 26 and Clifton — then Sims — on Aug. 28). NOMCO held a small gathering at the Maywood Multipurpose Building on Aug. 27 to celebrate the two Maywoodians’ 80th birthdays.

Both were presented resolutions from Maywood Police Chief Valdimir Talley and Congressman Danny K. Davis for their important community contributions.

Woll served 24 years as a trustee and four years as village clerk in Maywood. He also taught for 30 years at Elmwood Park High School, where he was a popular sports announcer. Woll was also a founding member and the first president of NOMCO, which was established in 1968 in order to keep at bay the massive white flight that was ravaging inner-ring suburbs and city neighborhoods across the country at the time. Woll said that when he and his wife Judy were hunting for a house to purchase back in 1965, it was important that it be located in a racially integrated area.

“This was the only community in the western suburbs — other than a little area in La Grange — that was integrated or had any significant number of African Americans,” Woll said. “That’s been a great experience for me and it’s been a great life.”

“I joined NOMCO in 1976 and I met so many wonderful people,” said Clifton, whose husband of 60 years, George, sat feet away from her. In addition to NOMCO, Clifton has served in a range of positions in the community, including on the boards of the Maywood Chamber of Commerce and PLCCA. She was also a Maywood Housing Authority commissioner.

“You’e just been wonderful to work with and you’ve been so dedicated to Maywood,” she told her NOMCO colleagues. “We all love Maywood, so we try to do the best we can for it.” VFP